As a result of damage, caused by Storm Desmond, which devastated Cumbria and other parts of the UK in December 2015, the busy Carlisle to Settle railway section, Eden Brows suffered a 500,000-tonne landslip ion February 2016. The landslip was so significant it forced the closure of the line near Armathwaite as soil and rock moved towards then River Eden. 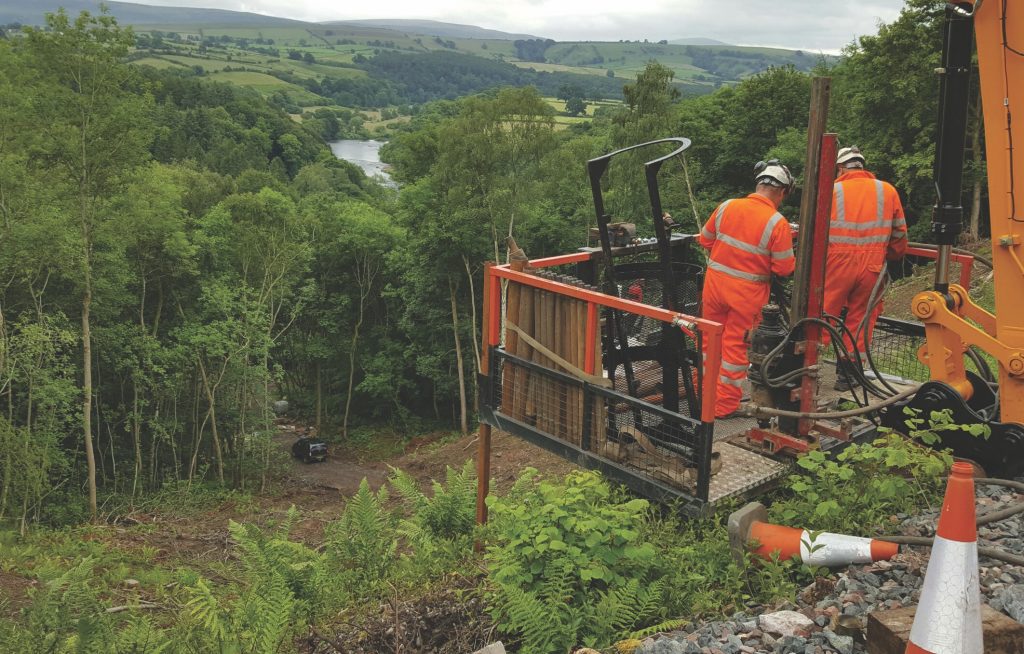 An important rail section, it was imperative Network Rail remediated the area swiftly and efficiently, with the minimal of impact to residents, and restore the line to full use.

Tasked with undertaking the repairs, Story Contracting Ltd, contacted Central Alliance, Part of the RSK Group, to undertake the necessary emergency ground investigations and survey works at the site. Within 48 hours of being notified, Central Alliance mobilised drilling plant, equipment and engineers to site and began the emergency ground investigation task.

The location of the landslide dates to the 1800s; located between two geological faults during initial rail line construction in the late 1800s, a failure occurred which ‘pushed the river into the next Parish’. Recent storm conditions reactivated the landslide causing movement around 15 metres depth between the River Eden and the railway. Understanding the ground conditions was therefore essential in understanding the geology and more importantly the design of the subsequent solution.

Central Alliance began works with window sampling and probe drilling at track level, but it quickly became apparent that the complex site geology and historical problems associated with the site were going to present a challenging engineering project. A difficult site from an access perspective, Central Alliance adapted its platform rig in order to allow attachment to a long reach excavator and using rope access was able to complete drilling to the depth required.

Packer permeability testing, in accordance with the designer’s specification to establish hydraulic conductivity at isolated depths was also undertaken by Central Alliance. This combined with downhole geophysics and complex geotechnical testing such as Bromhead ring shear, peak and residual shear box testing and tensile testing in order to establish Poissons Ratio and Youngs Modulus. The investigations and tests performed allowed the designer to build up a site model for design of the repair solution.

The Eden Brow project was a successful collaborative effort between Story Contracting and Central Alliance, in addition to Network Rail and other project partners, including AECOM, CAN Geotechnical and Van Elle. Works, with a combined value of the project is valued at £0.25M, were completed in several stages over a 12-month period, on-time and to budget meeting fully the client’s requirements.